Nature getting betrayed by humans

What are coral reefs?

Coral reefs, also known as atolls or barrier islands, form underwater mountains that extend for hundreds of miles along the coastlines of tropical and subtropical oceans.

These structures grow by building up layers of sediment from sand, and other sediments washed into shallow waters over millions of years. The corals build their skeletons out of calcium carbonate, dissolved in seawater to create a rigid structure. They secrete this limestone through particular polyps, which live on stalks extending above the water’s surface. Corals can be found all around the world, but they thrive best where there is plenty of sunlight and warm temperatures.

Yes! Corals release up to 100 times more oxygen when exposed to sunlight compared to other aquatic animals. As a result, coral reefs act as natural “oases” where fish populations thrive. These habitats also serve as nurseries for young fish before they migrate out to deeper waters. By providing shelter and food sources for wildlife, coral reefs are vital in maintaining healthy coastal communities.

The world’s largest coral reef is located off the coast of Belize, Central America. The Great Barrier Reef stretches over 3200 miles along Australia’s northeastern coastline. It covers an area larger than England and Wales combined. Coral reefs support billions of marine creatures and plants.

What is killing the coral reefs?

Global warming has been linked with the decline of corals worldwide. A study published in Nature Climate Change found that ocean surface temperature was directly correlated with the number of bleaching episodes experienced by individual coral colonies between 1985-2010. This means that if the average ocean temperature increases 1 degree Celsius, then there would be approximately 30% fewer severe heat stress events per year. When this happens, some corals expel their symbiotic algae called zooxanthellae.

Without its photosynthetic partner, the coral loses coloration and begins to die. Over time, entire sections of the reef may become barren due to the loss of algal cover. In addition, higher water temperatures cause increased acidity levels in the surrounding seawater. Acidification damages coral skeletons, making it harder for new generations of corals to build shells. If left untreated, acidic conditions can even dissolve coral tissue entirely.

What will happen if there are no corals present in the ocean?

Essential many species rely on corals for survival. For example, many fish use them as breeding grounds. Some sea turtles depend upon the structure provided by coral reefs for nesting sites. Even humans have benefited from coral reefs: they provide us with valuable resources such as seafood, tourism revenue, and protection against storms. Without these essential ecosystems, our oceans could lose half of their biodiversity within 50 years. 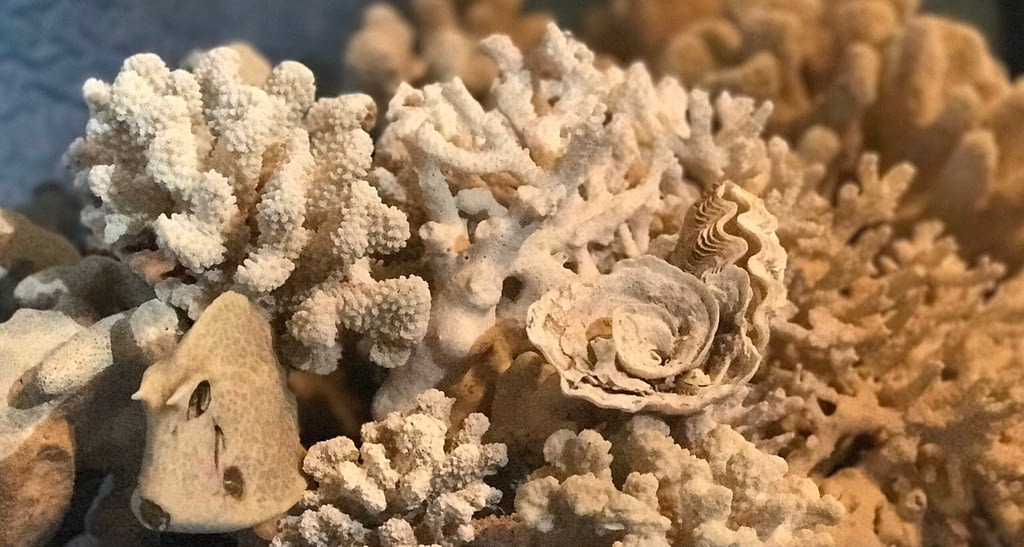 How can we save coral reefs from Climate change?

There are many ways to preserve these crucial ecosystems:

Carbon dioxide emitted during fossil fuel combustion contributes to global warming. Reducing CO2 emissions will slow down the rate of sea-level rise, reduce extreme weather events like hurricanes and typhoons, and improve the overall health of our planet’s ecosystem.

Many people don’t realize how much damage humans have done to coral reefs already. We need to protect them now so future generations can enjoy them too. There are several steps you can take to ensure your local environment remains free from harmful pollutants such as heavy metals and pesticides. Learn about environmental stewardship programs offered by state agencies, universities, businesses, and non-profit organizations. Visit EPA’s website to find information on federal regulations regarding hazardous waste disposal.

Some species of corals can recover after being affected by disease or physical trauma. For example, Acropora millepora, commonly known as staghorn coral, can regrow lost limbs within months. Other corals require years to heal fully. To help restore damaged reefs, consider planting native hardy varieties of corals. You could start at home by growing one yourself using aquarium supplies. Or visit a community garden center to learn which types of coral grow best in different regions.

Scientists around the globe are working diligently to understand what causes climate change and how to mitigate its effects. Research projects include monitoring changes in atmospheric carbon concentrations, studying impacts of rising seas on coastal communities, developing models predicting the effect of increasing temperatures, and identifying solutions to combatting the problem.

What is the biggest threat to coral reefs?

The biggest threats facing coral reefs today come from ocean acidification caused by excess levels of dissolved carbon dioxide in seawater. Ocean acidity has increased dramatically since preindustrial times due to anthropogenic sources of CO2, primarily burning coal, oil, and natural gas. In addition to reducing surface water pH, this process increases the concentration of hydrogen ions, making it more difficult for many calcifying marine life forms – including corals – to build their shells and skeletons.

Human activity plays a crucial role in determining how quickly coral reefs respond to changing climatic conditions. For example, people living near coral reefs have access to boats, nets, and spear guns, all of which allow them to harvest large numbers of invertebrates at a low cost. These activities deplete resources needed by reef organisms, including fish larvae, plankton, and other animals who depend upon healthy coral reefs for survival. The use of destructive fishing methods also destroys the habitat necessary for juvenile fishes to reproduce. Additionally, overfishing reduces biodiversity, causing
specific populations to collapse. All of these factors contribute to an increase in human pressure on marine environments.

If we look at the oceans today, we see that they are in bad shape. Coral reefs are dying all over the globe. This is due to pollution, climate change, and the introduction of non-native species. If we don’t act now, coral reefs will disappear within decades. They provide homes for many species, including fish, sea turtles, and even sharks. Without them, the ocean ecosystem will collapse, and marine life will suffer.